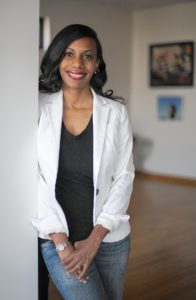 Natalie Y. Moore is an award-winning journalist based in Chicago, whose reporting tackles race, housing, economic development, food injustice and violence. She is available for speeches or keynotes on these issues.

Natalie’s acclaimed book The South Side: A Portrait of Chicago and American Segregation received the 2016 Chicago Review of Books award for nonfiction and was Buzzfeed’s best nonfiction book of 2016. She is also co-author of The Almighty Black P Stone Nation: The Rise, Fall and Resurgence of an American Gang and Deconstructing Tyrone: A New Look at Black Masculinity in the Hip-Hop Generation.

Natalie contributed to “Southside,” a collection of stories about the criminal justice system in Chicago in collaboration with The Marshall Project/Amazon Original Stories in 2018. For the 100th anniversary of the 1919 Chicago riots, she co-wrote a 30-minute audio drama with Make Believe Association that aired on WBEZ. 16th Street Theater adapted portions of “The South Side” in 2019. Haymarket Books will publish “The Billboard.” The play is part of the 2021 Bridge Program of the National New Play Network.

She is a 2021 USA Fellow. The Pulitzer Center named her a 2020 Richard C. Longworth Media Fellow for international reporting. In 2021, University of Chicago Center for Effective Government (CEG), based at the the University of Chicago Harris School of Public Policy, welcomed her in its first cohort of Senior Practitioner Fellows.

Natalie’s work has helped shift the way Chicagoans today think about segregation in the region. She is a sought-after speaker for high school assemblies, colleges, foundations, churches, festivals and community groups. Natalie is still thrilled Alex Trebek said her name. In 2019, Natalie and her book were a “Jeopardy” clue.